A tiny section of smartphone accessories that are on offer.

Each game store has hundreds of second-hand games for sale for almost every single console (even PS2 and OG Xbox games!), some at a ridiculously cheap price. Do not be put off by this, they let you check the condition of the disc before you hand over your money. Out of all my years of going to the shops in this “game district”, I have never had a problem. Well, once I bought “The Walking Dead: Season 2” which was programmed to be played by American Xbox consoles, but I took it back and explained my problem and they had no trouble allowing me to choose another game.

This is what happens if you go too early/late.

Here is the Facebook page of the main gaming shop in the shopping complex:
https://www.facebook.com/FTGameSquare

This is what the entrance to Ho King Shopping Centre looks like.

Look around, and you may find some really random shops. At the moment, I know there’s an organic, luxury coffee bean and barrister shop; something that’s considered quite unusual in Hong Kong (especially in Mong Kok). I’m not sure how much longer it’ll be around, considering I’ve seen about 50 different random shops open and close up there, but it’s definitely worth a browse. One thing for certain is that the game stores get constant business, and have survived for years. There’s a shop called “Game City”, where the walls of the store are literally created with stacks of games for sale (impressive construction in true HK style). They have even hired someone who knows the walls inside out, and can find your game within seconds. Yes they also have cheap smartphones/iPads/consoles. 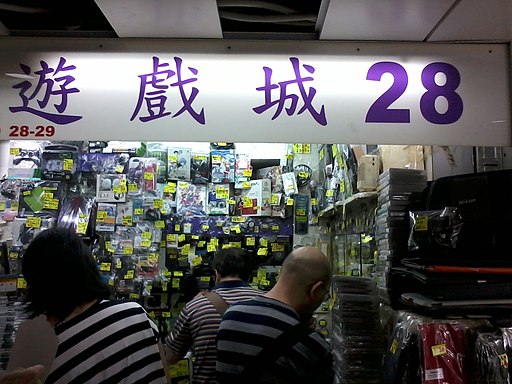 Half of the entrance to Game City (no shot of the “game brick wall” though).