Nam June Paik was a Korean/American artist, born in   Gyeongseong (Seoul during the period of Japanese occupation in   1910-1945) on the 20th of July 1932. Paik was known as the   “father of video art (The Art Story, 2020)”, who   experimented with   analogue video, “is one of the most manifold media artists when it   comes to his selection of material, constant readiness to test the   implementation of new technologies and cross-boundary activities   (Holling, 2013)” who’s “revolutionary practice laid the groundwork   for today’s   artists working in ned media art (The Art Story, 2020)”.   Paik created different works throughout his entire life, up until his   death in 2006, and lived and practiced through various periods, with his art falling into Neo-Dada, Modern Art and Fluxus art periods. “Paik’s early training in classical music combined with his interest in utilizing sound elements from real life, inspired by artist John Cage, positioned his career early as a member of the Fluxus movement. His passion for combining audio, visual, and electronic elements was formed there (The Art Story, 2020)”. Paik was a pioneer, who predicted many of the things we see today such as social media and internet – “writing about his desire for a ‘video common market’ that would allow for the free dissemination of not only artwork, but also education, collaboration, and dialogue on an international scale. His ideas have come full circle with the advent of today’s Facebooks and Youtubes (The Art Story, 2020)”, and even coining the term “‘electronic superhighway’ to denote what he saw as a future in which technology would allow for boundary-less connection between people on a global scale. His term might be considered the first mention of the concept that would eventually become manifest in the Internet, and is in fact, the term used universally today (The Art Story, 2020)”. This is particularly interesting when we look back to our courses prompt, How do the affordances of Instagram affect the way photos and videos are authored, published and distributed in the network? One could argue that Paik was the reason the Internet, and subsequently SNS’s such as Instagram, came to the fore. Nam June Paik began authoring, publishing and distributing photos and videos long before Instagram was even a thing.

An example of his work is his 1995 piece, Megatron/Matrix. Megatron/Matrix was one of Nam June Paik’s final works, before a heart attack left him paralysed until his death. Made of 215 monitors, it represents a flashing billboard of sorts that consists of two sections. 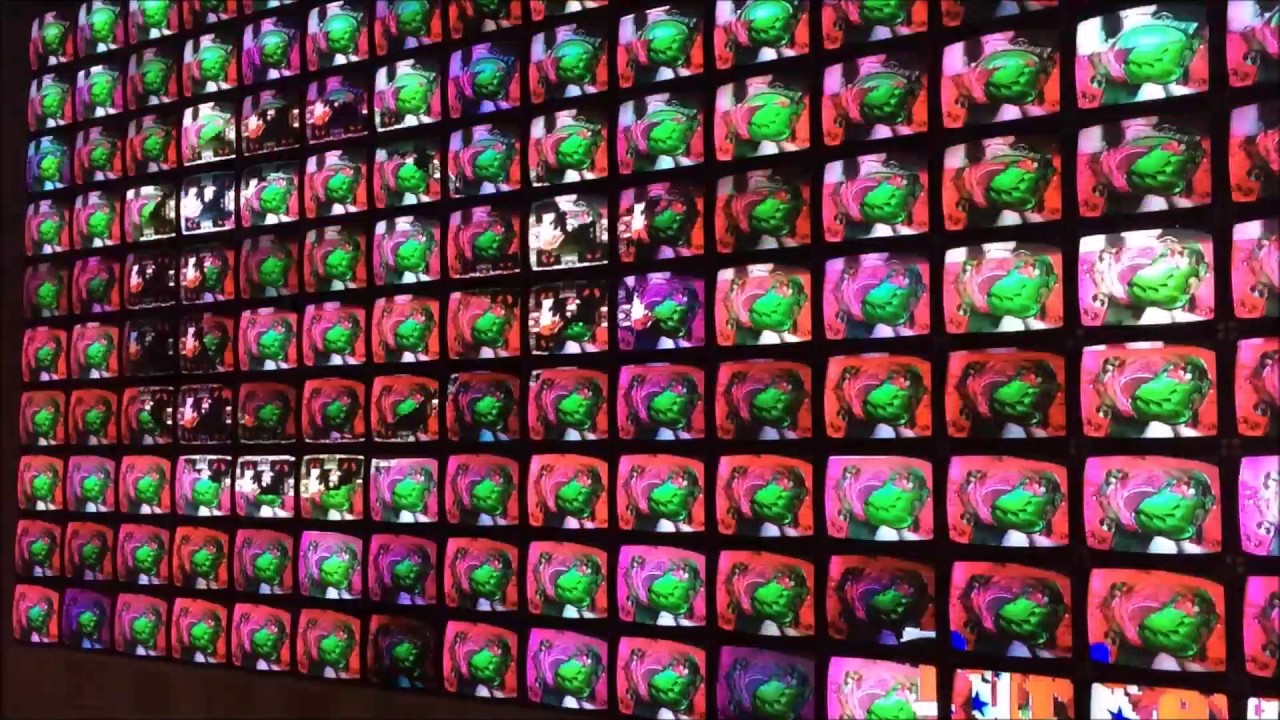 “The Megatron is a massive grid of monitors placed side by side in straight rows and columns. The screens show smaller clips in an array of disparate real world images from the Seoul Olympics to Korean folk rituals to modern dance. On the boundaries between screens, larger, animated images emerge, demonstrating the idea of a world without borders in the electronic age. If the Megatron conveys the vast reach of media culture, the smaller section, the Matrix, emphasizes its impact on each of us. In Matrix, the monitors are arranged in a way that the images seem to spiral inward around a lone, central screen showing two partially nude women. The artist may be suggesting that our bodies are our primal connection to the world, but like the lone screen we are surrounded by “too much information” – The Art Story, 2020. Nam June Paik Art, Bio, Ideas | TheArtStory

Megatron/Matrix is a symbolisation of Nam June Paik’s awareness of the power of video technology and how it should be realised in the new millennium. Because this piece is an installation, one would presume that the authorisation of this piece would involve the setting up of the monitors on a wall with enough power points for them all. Paik then would have carefully chosen what part of the image/video that would be on each monitor, that would then make sense once put all together. It was then purchased by the Smithsonian American Art Museum in Washington D.C. for display – however, an image is available to view on their website.