Updates from a media maker.

Our radio feature assessment has been a fun experience. It was definitely a bit of a stressing process, as we had the second live show on Monday the 22nd. A lot of us were sick for the duration we spent working on the piece, or had dramas occurring in our personal lives. It was not ideal, but we’ve soldiered on together. Everyone still put in effort where necessary, despite the circumstances. The majority of us were good at communicating with one another constantly – which is so important in group work. I cannot stress that enough. As a result of persistent Facebook messaging and updates, we were understanding of each other’s situations too.

So, we looked at YouTube as a platform and its utility in society, it ended up being a particular focus on the use of YouTube among millenials. Where it has been a place for youths to grow and express their creative ideas. At first after we decided on our topic of YouTube involvement more generally, I was kind of concerned about the angle we were going for. Once the editing began, things started coming together and there were clear common themes among the content from the subjects involved. This was a relief. I also found that there was just the right amount of contrast in opinions. For example, Beth, assures the audience that Facebook as a vehicle for connectivity to her audience, was the least favoured mode of choice. Whereas both Robbie and Andrew explained it was the best. This was interesting as the content which Beth creates is experimental and Robbie and Andrew’s work is comedic. Perhaps connoting the differing communities which can be found among certain social media platforms. 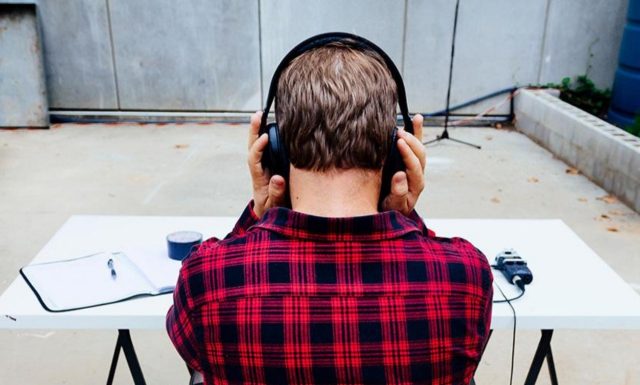 I contacted Ben asking for his aid by participating in our radio feature. He was keen, organised, a great speaker and well versed in the area we were discussing. I had him as a tutor in first year of my degree and remembered creating video blogs as an assessment task in Popular Culture in Everyday Life. This lead me to deem him as someone with knowledge of our topic. Surely enough, he was able to speak about it all rather eloquently. Not to mention, Sammy and I spoke with him in the recording studio for almost an hour! I feel he was a perfect subject for our feature.

I suggested we study some of his applicable articles to understand and explore the areas which Ben could share insight into. I found this was really helpful, and I made sure the group knew that I found it important they read some of his work to get a good grasp on what he’s studied and how we could utilise this knowledge. As of course, this would (and did) help inform the curation of questions.

I looked at the following to grasp a little more insight into his areas of knowledge:
– Byrne, B., (2011). Digital sound: on technology, infidelity & potentiality In: Sound Scripts: Proceedings of the 2009 Totally Huge New Music Festival Conference, Australian Music Centre, Sydney, Australia
– Byrne, B., (2016). Noise: tone, paramedia and multiplicity In: Screen Thought: A journal of image, sonic and media humanities, 1, pp. 1 – 7

Compiling questions for Ben was initially slightly daunting as I was freaking out a little, thinking to myself “oh no… we’re going to be talking to AN ACADEMIC WITH A DOCTORATE, WE’VE GOTTA SOUND WELL-READ!!!” In the end we were well prepared due to my ability to freak out and push myself into over preparation…

We got some really good audio clips from our extensive conversation with Ben. The teaming of his introduction saying he’s a lecturer and following with Helena and Pippa (Leftovers, Andrew spoke on behalf – he’s also involved) in a clip from the show where they discuss that they’re “…going to go to all classes this semester…” was really clever.

Robbie Nicol from
White Man Behind A Desk

Robbie is an acquaintance of mine from when I lived in Wellington, NZ. He started White Man Behind A Desk with Sally and Elsie Bollinger in the time I have been living in Melbourne – so I’d never spoken to him about it directly. I had only seen his online performances online through my friends linking the team’s content to their Facebook pages.

Organising to record this one was a challenge. I initially arranged to speak with him on a Monday after our class, but something came up and he wasn’t available. So we rescheduled for the Tuesday. I got into a phone studio at RMIT… at 8:30am. Only to find that RMIT doesn’t allow international calls (surely the $21,000 degree I’m completing could cover a half hour call to New Zealand?! Ridiculous). This threw a spanner in the works and I had no money to get a calling card and I had a class to attend soon after. In the end, I had to send Robbie a list of proposed questions for him to answer. It was a shame, because I was looking forward to talking to him about it, and thought it would sound much less personable if it were one sided. I told him it would be fine for him to use his iPhone as a recording device. It was going to be on a phone line anyway, after all. I think this added texture to the piece, he also states he’s in New Zealand in the feature so our audience can piece together that it wouldn’t have been able to be super high quality. Despite my concern that the answers would not seem conversational, he did an awesome job of making it sound seamless. He also has a very distinctive voice so it was really great aid in creating variety within the feature.

Their show has transcended from the realms of purely YouTube, and managed to gain a place on the stage at Bats Theatre in Wellington as a live performance!

Beth was amazing to use because her content is so different to Robbie and Andrew’s work. It’s more experimental video. This was great because it made the piece more inclusive and recognised differing audiences. Her videos are beautiful and she was such an awesome speaker as well, and had some insightful words to say about YouTube as a platform. She was a very vital role in the piece!

I was very stoked that our group managed to nab some time from a person involved in Leftovers because I LOVE the web series. They’re such hilarious people. It’s fantastic. Unfortunately, I wasn’t able to attend this interview as I had a class. But, Olivia and Rose interviewed him at Triple R after our second live show. He definitely had some interesting input to the interconnectivity of Facebook and YouTube; that posting videos to Facebook gained more traffic opposed to YouTube links. Whereas, Beth said she wasn’t into Facebook posting for videos because the community isn’t the same. The juxtaposition made an interesting remark on the nature of content and their audiences, and which platforms they come to, to share thoughts.

I had this grand idea that we would have vox pops and people would actually do them… but they didn’t. I wanted the content to be varied in accents etc. because YouTube is used in so many different countries and it would have made it more inclusive. This meant sending out questions to people (as they were in other countries) and them sending us the audio file… but no one got back to me with the answers after saying they would…
But, we didn’t have space for them anyway! So it was fine.

Initially I had suggested that we use an audio grab from the first ever video uploaded to YouTube (below) on April 23rd of 2005. I felt this would be a warmly nostalgic clip to include as the initial introduction to our feature. Whether people recognise the video audio or not was an issue however – Olivia decided on taking it out as she knew not many people would recognise it. I think it was wise to take out as it may have seemed a little random.

The video audio grabs we ended up going with were far more recognisable for your average YouTube surfer!

Although I’d have liked a more equal balance of women to men, I am so pleased with the variety as it is. Both in terms of (relatively) diverse video content genre, the subjects and their differing involvement with YouTube and their contrasting vocal tones. Overall, I thought we did an awesome job on the piece and put heaps of hard work into it. I stand by expressing that we work really well as a team.